Four-color deck and an
alternative red card back

Bold Poker 3.4 is available today and brings a new four-color deck as well as a second red card deck.

Are you sick of betting on an imaginary flush? With Bold Poker 3.4, available today for iOS and Android, this is a thing of the past: just enable the new four-color deck.

Unfortunately, there currently can be some serious delays receiving a dealt hand from the server on bad Wi-Fi networks. While we are trying to solve this properly, it’s currently possible that a dealt hand is received by a player with, at worst, up to 100 seconds delay. This, though, happens very rarely — we’ve personally observed this only in less than 10 hands out of probably more than 6,000 hands played. To make things clearer, we’ve introduced a second red card back, that’s used on every other hand. This way you can tell by the color that you’ve been dealt a new hand, instead of having to check the hand number.

We’ve also updated the server along with the apps and now require everyone to be on the latest version of Bold Poker so please make sure you’ve updated to version 3.4 before you try to play your next game!

We hope this release makes the Bold Poker experience smoother than ever for you. As always, please let us know if you encounter any issues via [email protected] and keep dealing with it!

Bold Poker 3.3 is available today and improves connectivity and more

For this release we focused on getting all players on the table as seamlessly as possible. Along with that, we also improved performance quite a bit.

Together with the latest Bold Poker for Android, Android clients find and join tables automatically, even if they are not on the same wifi network.

Lastly, we added compatibility with Apple’s upcoming iOS 9 and use memory much better now, especially after playing on multiple tables.

We hope this release makes the Bold Poker experience smoother than ever for you. As always, please let us know if you encounter any issues via [email protected] and keep dealing with it!

Bold Poker for the Blind

Bold Poker 3.2 is available today and brings support for
VoiceOver and more

We’ve always been amazed with how well iPhone works for people with visual impairments and we’ve wanted to make Bold Poker work for as many people as possible.

Starting today, VoiceOver users can connect their headphones at the table and have their cards read out to them. There will still be rough edges as we weren’t always sure how verbose we want VoiceOver to be but we consider this to be a solid start of a larger effort in being more inclusive. We would love to hear your feedback (especially if you’re visually impaired).

Also, many thanks go to Sally Shepard (@mostgood), without whose fantastic support, these features simply wouldn’t exist. 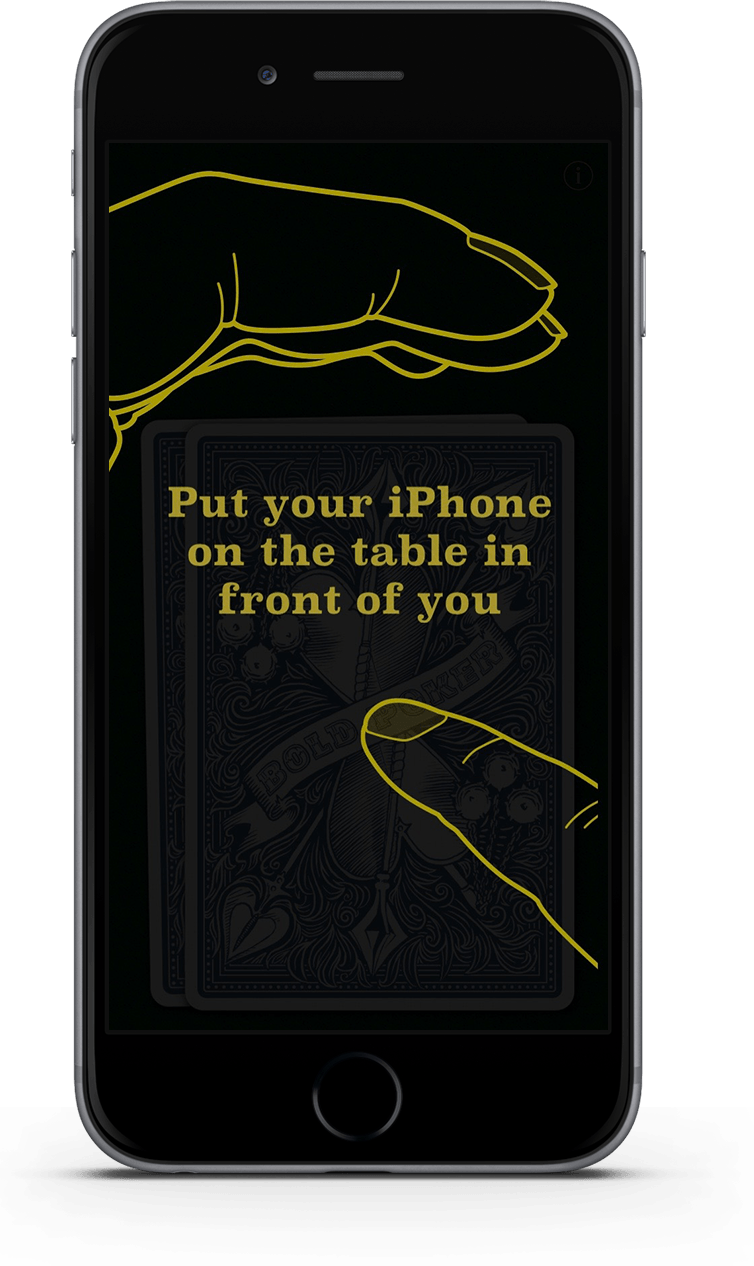 How to Bold Poker

One thing we noticed when introducing new players to Bold Poker is that they would look at their cards with their iPhones raised from the table. (The way people typically hold their iPhones.)

We believe the better way to use the app is with your phone laying flat on your table, covering up the screen with one hand and sliding your finger down on the screen to peek at your cards. So from now on, we’ll show you a little guide on how to best look at the cards when the iPhone is being lifted from the table.

Lastly, we also improved the welcome screen on iPhone. The host and join chips now move offscreen when you interact with your pocket card, avoiding any accidental presses. As soon as you touch and interact with your cards, you’ll see indicators that guide you through the three basic interactions: peek, fold and showdown.

We hope these improvements allow more people to try out Bold Poker and make it easier to deal with it!

Five years ago, we began work on Bold Poker for iPad and iPhone. After our first poker nights using the beta, we were convinced. It made Texas hold 'em gameplay so much more fun, allowing us to spend more time playing hands and less time dealing cards.

In late 2012, we released the first public version of Bold Poker. This ran on iPad and iPhone only (Android players were out of luck at this point).

In 2013, we built support for Android as well as the ability to play Omaha games. We changed the pricing to allow players to download a free app. Only the host would have to buy the app on the iPad.

We have players using Bold Poker on a regular basis at their home games, but the app has so far failed to sustain itself as we believe it could. Here the app revenue from the last two and a half years:

One of the main issues we kept running into was with the interaction for the players' cards. The interaction was only ideal with mirrors underneath the players' phone. We looked into ways of making and distributing custom made mirrors to players, but ultimately decided it would not be worth it.

Last fall, we found a much better solution. Bold Poker 3 introduces a new interface for the pocket cards that vastly improves the app:

Put the phone flat on the table. Pocket cards are shown in front of you, face down.

To peek at the cards, cover up your phone's screen with one hand and slide your finger down on the cards. This ensures only you will be able to see them.

Show your cards by sliding all the way down. Fold by throwing them into the middle.

Click anywhere onto the iPhone’s screen to try out the interactions for yourself.

This interaction feels extremely natural. We worked hard to make everything feel as intuitive as possible, using physics-based animations throughout the app. It is so close to playing with real cards that it seems obvious in hindsight.

There's really no alternative to trying it out yourself. We've made that easy. You can download the free Bold Poker app and try out the interactions right from the welcome screen without having to join a real game. Or better yet: try it out at your next poker game.

Using Bold Poker is free. The only limitation is a five-minute break every half hour. Even with these breaks, you'll be able to play more hands in a night compared with a normal regular of cards.

If you want to play without breaks, it's only $4.99 to unlock the whole table all night long (24 hours) for any number of players.

We hope you start dealing with it!